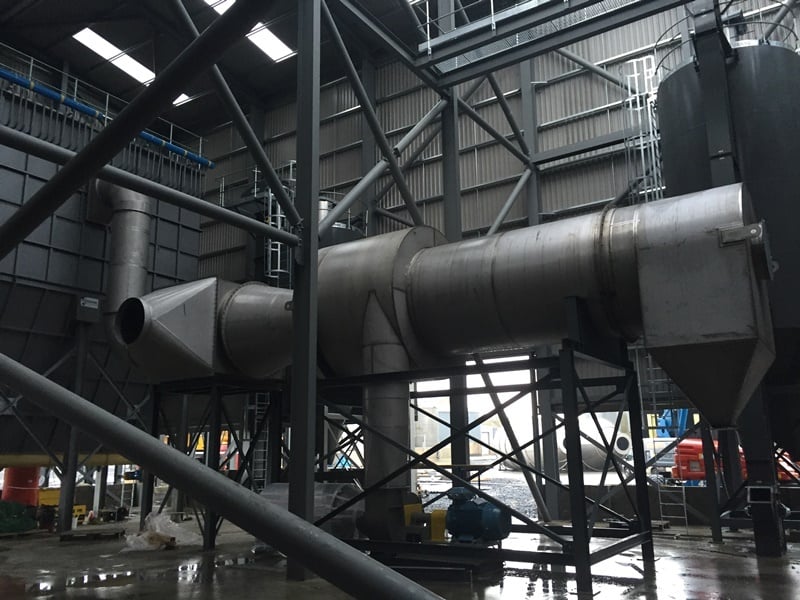 Because of their overall effectiveness and reliability, baghouses and cartridge collectors are the most widely used dust collectors in industry today. The filters in these systems are very effective at capturing several types of particulate matter and have the benefit of being able to be regularly cleaned, which keeps overall system efficiency at peak levels.

But, some types of dusts can prove to be problematic for filters. For instance, fibrous dusts, such as those generated in paper or textile processing facilities, can become embedded in filter media and fail to release during cleaning cycles. Wet or sticky dusts that are common in food processing applications or in facilities with high humidity can provide similar challenges with wet or sticky particulate material becoming caked on the filter surfaces. Many types of filter media are also adversely affected by being exposed to moisture because it may cause the filter to degrade rapidly, allowing holes to develop.

With so much of the efficiency of a dust collector relying on the integrity of its filters, any circumstance that might allow the filters to become impeded with wet, sticky, or fibrous material needs to be prevented. If not, the entire system will experience higher pressure drops, lower airflows, decreased efficiency, and possibly lead to unsafe working conditions or violations of air emission permits.

One proven method of keeping filters from becoming impeded by problematic dusts is to install a pre-filter cyclone in the dust collection system. The cyclone is designed to remove larger, heavier dust, while allowing smaller particles to pass through the cyclone and through the filters. In many applications, 80-90% of the particulate matter entering the cyclone is removed, which is a significant reduction in overall system loading. This is especially true when dealing with wet, sticky, or fibrous dust.  With this decreased volume of dust reaching the filters, filter life is extended, with cleaning and replacement needed less frequently. This means reduced maintenance cost while sustaining optimal operating efficiency.

To learn more about pre-filter cyclones, click on the button below. 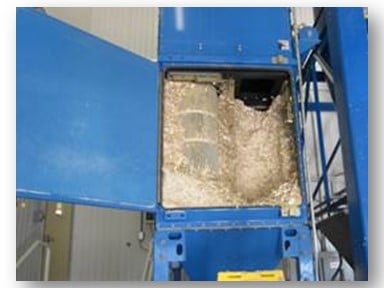 For dust collection systems to operate as they are designed, baghouse and cartridge collector filters need to be regularly cleaned.  Many systems employ compressed air for this purpose, periodically sending blasts of air through the filters which effectively removes particulate matter from them. The frequency of these cleaning cycles can be controlled by various methods, such as a pressure drop monitor that allows for detection of a filter that is beginning to clog, or with a simple timer. Air flow is typically controlled with the use of a solenoid operated diaphragm valve.

These valves are the critical component in keeping a system operating at peak efficiency. A valve that is stuck in the closed position or does not open when required will not allow the filters to be cleaned, which will result in an overloaded system that could potentially allow higher than expected levels of particulate to be discharged into the atmosphere or lead to premature system failure due to increased loading.  Conversely, a valve that gets stuck in the open position will result in costly compressed air being constantly sent through the filters.

Maintaining the health of these valves is obviously an essential factor in promoting the long term effectiveness of a dust collection system. The simplest way to achieve this is by making sure that the valves are included in a preventive or predictive maintenance program, so that any issues can be addressed before they become major problems. More advanced systems provide continuous monitoring of valve operation, which can alert maintenance personnel to any problems with the valves or the system in general.

To learn more about how Aerodyne can help you keep your dust collection filter cleaning system operating efficiently,  please contact our experts at 440-543-7400 or click on the button below to watch Dust Collection System Maintenance Video.

Fire Protection Provided by the Power of a Pre-filter Cyclone 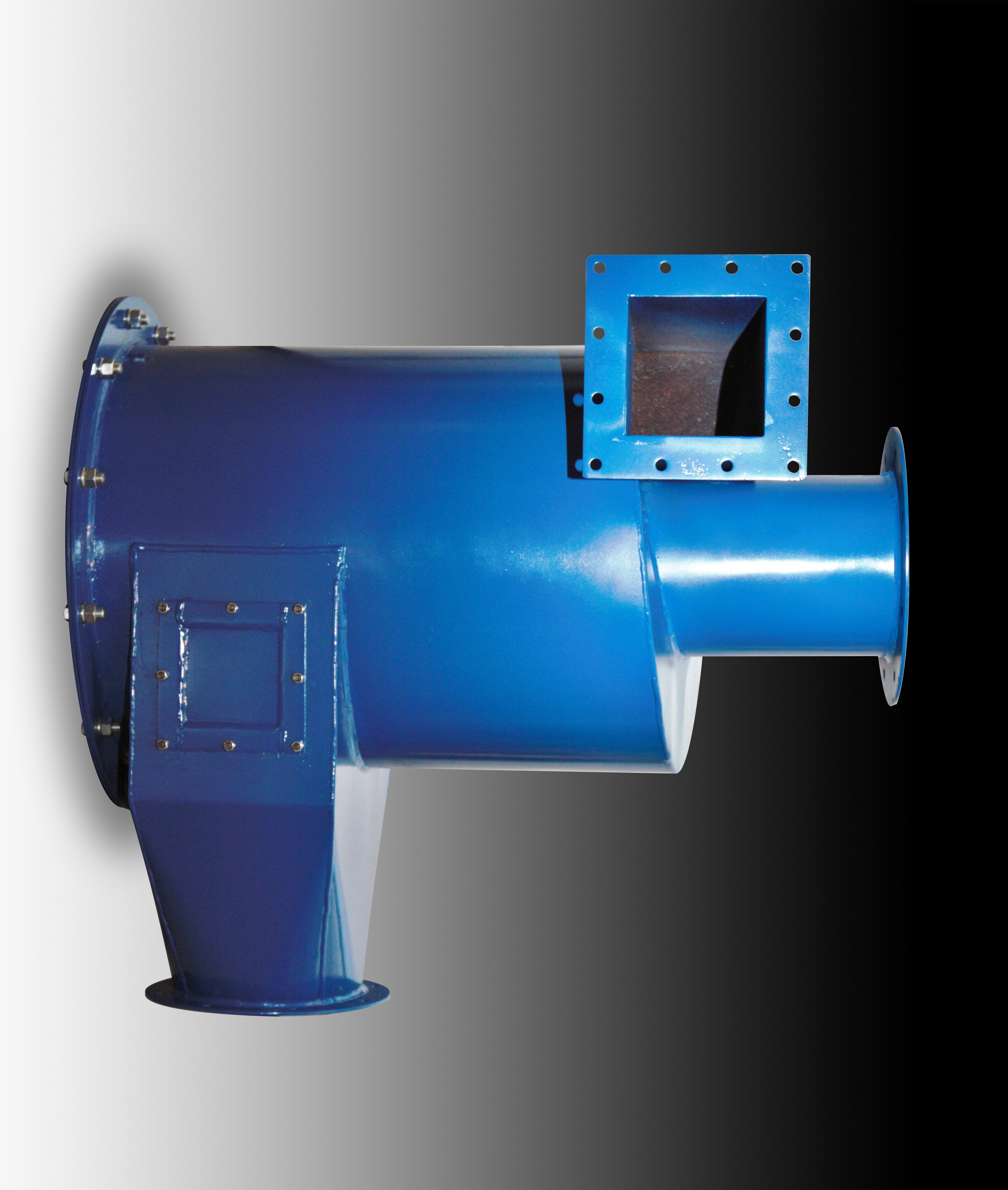 When designing a dust collection system, one of the most critical design considerations is fire protection. Filter media that are typically used in baghouses, cartridges, or simple filters are most often constructed out of combustible materials. If your dust collection system is being used for an application that is likely to produce sparks, such as cutting, grinding, sanding, or welding, then there is a possibility that a spark could reach the filters and cause an explosion or fire in the system, which could lead to catastrophic damage and potentially loss of life.

One method of preventing sparks from reaching the filters is to incorporate a pre-filter cyclone as a spark arrestor. Air that is contaminated with dust enters the cyclone through an inlet and is then directed towards the walls of the unit. Centrifugal force then takes over, as heavier particles are carried outwards to the wall of the cyclone, spinning along the walls until discharged at the bottom into a hopper. Because cyclones are typically constructed of metal, any spark that touches the cyclone wall will be drained of heat due to thermal conductivity losses. The combination of reducing the speed of the spark and allowing it to lose energy in the cyclone result in an economical and proven method of spark arresting in dust collection systems.

In addition to working as a spark arrestor, a cyclone provides the additional benefit of collecting 80-90% of dust that would otherwise reach the filters.  This results in longer filter life and decreased load on the system which can greatly reduce energy costs.

To learn more about how a cyclone could be utilized in your dust collection application, please contact our experts at 440-543-7400 or click on the button below to get your Cyclone Brochure.

The Pulse-On-Demand Controller – the Wave of the Future 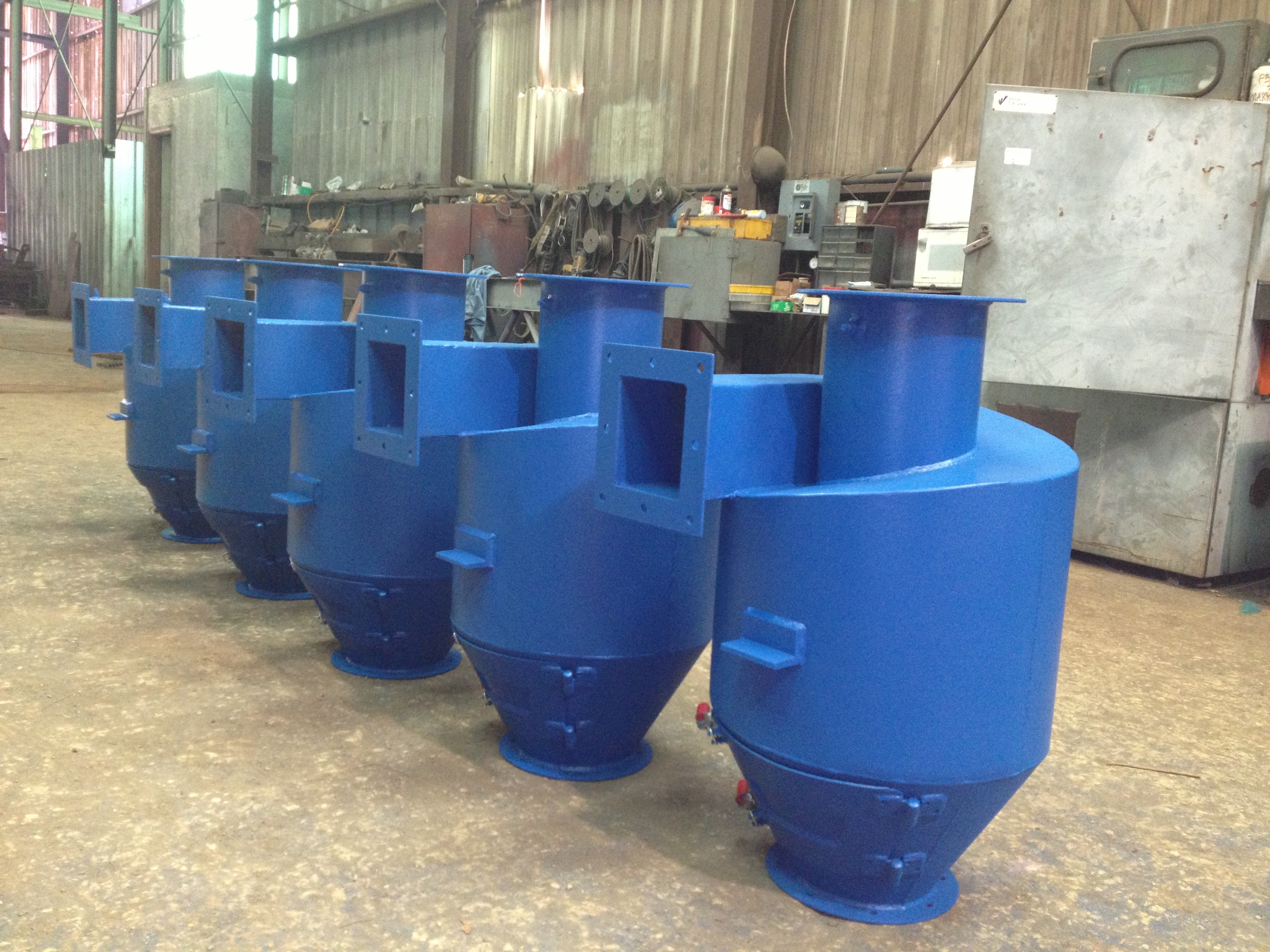 This means that you won’t have to clean your filters unless you need them, which makes everyone’s life easier, except maybe for the bag manufacturer!  Less cleaning also means that your filters will last longer, and you’ll save extra money otherwise spent using more compressed air.

To increase the time between required cleanings, you can also add a cyclone pre-filter before the baghouse section to decrease the loading on the baghouse, so that it takes longer for the filter’s pressure drop to increase. This way, your bags will last longer while your compressor works less, saving your facility money.

Benefits of a Horizontal Cyclone: A Short and Sweet Space-Saver

Almost everyone in this industry is familiar with using a cyclone for dust collection. Cyclones work great as pre-filters, decreasing loading and minimizing contamination before a baghouse or cartridge collector. However, many times you don’t have the head room to install them.  Or you have an existing dust collector and no room to install a cyclone pre-filter.

Traditional cyclones are tall, vertically oriented structures. Indoors, they take up a lot of room. If they are outdoors, there can be maintenance issues.  There are even installations where a hole in the roof is required to install the cyclone. That is obviously very expensive.

All of these challenges can be overcome by selecting a horizontal cyclone.  Because they are horizontal, they are usually ⅓ the height of a traditional cyclone.  This means they can fit in low headroom areas.  The other benefit is that both the inlet and outlet of the cyclone are on the horizontal plane.  That means the cyclone can replace a 90° turn of ductwork (vertical or horizontal), further saving cost

What’s more, some types of horizontal cyclones have a design that increases the efficiency of dust collection, so that a smaller cyclone can match or exceed the efficiency of the tall cyclone. This saves space and cost, because material costs make up a significant portion of the cost of a cyclone

The short version of the story is this. The next time you are thinking about replacing your baghouse or cartridge collector because you can’t install a cyclone pre-filter, investigate a horizontal cyclone.