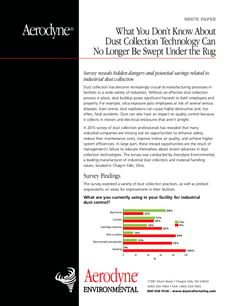 A recent survey of dust collector users, performed by Aerodyne in 2015, found that the majority of all dust collectors in use are over seven years old, with 45% of all units being over 10 years old.. This finding begs the question: why use these purchases for so long? A few reasons spring to mind.

As a capital asset, a sufficiently large dust collector can be depreciated, or lowered in value, by a set amount each year or period. When the capital asset hits $0 in worth, the item is considered valueless and at the end of its usable life. Depreciation reduces the tax burden on the company, lowering net income, and therefore the amount to be taxed, before being added back in after taxes. On the other hand, selling a piece of completely depreciated capital equipment could have major tax implications if sold for more that depreciation value. It is possible to extend the life of the equipment through collectors such as the GPC as a prefilter, potentially helping the main collector retain value for longer in case of sale.

Installing a dust collector is rarely a simple undertaking. Moving a large dust collector in can result in a total shutdown as the dust collector is installed into the HVAC dusts or potentially release harmful dust into the workplace in violation of OSHA protocol. Even more delays could be found, including CFM incompatibilities, insufficient space for installation, and other inconsistencies between dust collectors. Adding a prefilter dust collector may be able to extend the life of the main collector by reducing the amount if dust travelling through.

Capital equipment is meant to last over a significant period. As such, the vendors of capital equipment sell it for a high price. Even after taxes and difficulty of installation are factored in, some companies have other places they’d rather spend the money on, such as equipment directly tied to sales and production. Lack of budgeting can end the hopes of a dust collector’s replacement before they even start. Potentially helpful are prefilter collectors like Aerodyne’s GPC units, which are cheaper than a full size unit and help reduce particularly harmful particulate from reaching the main collector. A Point of Use Collector, if placed near the source of the dust, could also help remove dust for a lower price point than a large collector.

It can be easy to forget about the dust collector. The device isn’t particularly attention-grabbing, especially since a successful dust collector creates an absence of dust rather than a visible presence. Only when dust starts leaking in excessive amounts is the collector brought to the fore.

Granted, motives differ from company to company, but these four reasons seem the most likely across the industry.

To learn about the further findings of Aerodyne’s survey, get a free copy of Aerodyne’s white paper detailing the answers to several of the most vital questions surrounding dust collection.